The plethora of videos entitled ‘100 years of’ is now commonplace on YouTube, and like the millions of people who have indulged in the series, I’ve enjoyed the many creative attempts to showcase a decade by decade time-lapse of the changes in style, beauty and social norms.

It’s not a secret that African countries are often overlooked when creators decide which regions to feature. And after years (literally) of waiting for someone to create something for Nigeria, that old saying ‘if not us then who’ echoed through as I remembered that the onus is on us to tell our own stories.

Much of the research was aided by Ụ́kpụ́rụ́’online documentation of historic images. Whilst researching, it became clear that; looks, beauty practices and styles vary throughout the Igbo region. As a result, our goal was to try to find a way to showcase the diversity of Igbo people, and to highlight the uniqueness of the style, hair and fashion trends for each decade.

Much of Igboland was colonised in the late 1800s and early 1900s, with Nigeria becoming a British protectorate in 1901. From the 1910s to 1930s the colonial regime within Nigeria was yet to substantially impact the day to day attire of most Igbo men.
One item of clothing the colonial regime introduced to the Igbos and neighbouring ethnic groups was known as the ‘lungi’, a plaid patterned material of Indian origin referred to as ‘madras’. Colloquially, the cloth is called ‘Jịọjị’ (George) and the style of cloth was and is still used as cultural attire within the region.
The looks for the 1910s – 1950s features the ‘George’ wrapper tied around the waist of the model to represent the practice of men tying a cloth around their waist (photo below). 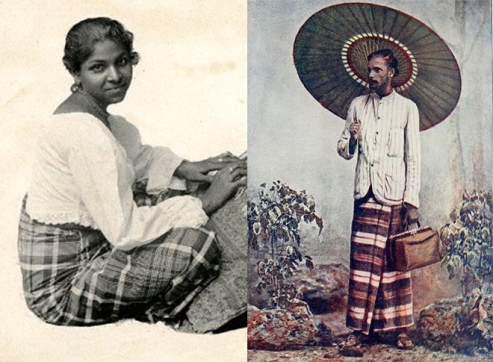 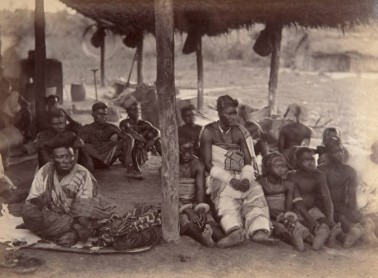 This picture taken c. 1889, possibly by G. F. Packer credited with other photos from the Niger and Önïcha (Onitsha) (and of Önïcha trading women), is annotated as ‘Trader from Timbuctou’ on the right and ‘Rich Trading Woman’ on the left. 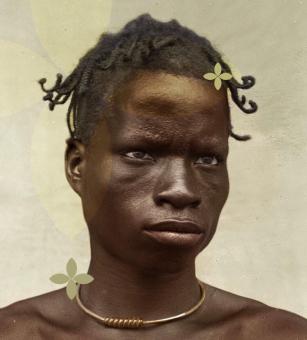 The look for the 1910s took inspiration from a photograph of a boy named Okonkwo in Akwa. The photo was taken between 1909 – 1913 by Thomas, Northcote Whitridge. (Colourised by Ụ́kpụ́rụ́)

For this look, along with the George wrapper, we’ve incorporated a necklace made of cowrie shells as an aesthetic variation. 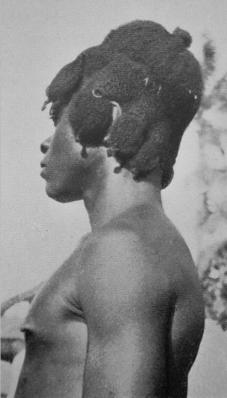 Northern side of the Igbo area. The photo was taken around the 1920s

The historic image shows a hairstyle worn by young Igbo men around the northern side of the Igbo area. The photo was taken around the 1920s.’

The model is wearing a George wrapper with cowrie shells decorating the hair.

The 1930s interpretation is based on the young man on the right-hand side of the image. The hair has been braided and puffed (similar to the 20s look above). A string has been weaved through the centre of the hair to emulate the thin white lines that connect to gather the hair at the front.

As seen through the aesthetics of the 1940s and 1950s. The clothing and hairstyle variations represent increased exposure to western culture.

The look for the 40s was inspired by the unknown man standing in the background of the image above. The simple hairstyle, western-style light top and wrapper indicate an increase in the uptake of western clothing.

The attire for the 1950s is heavily based on this 1949 video of Igbos learning English (brought our attention by @igbolites).

The video showcases a variety of styles worn by Igbo men, which features British style hats and unique accessories.

For this look, we have attempted to recreate the necklace worn by the man at the right of the first frame and the bucket/bowler style hats worn by several of the men in the video. 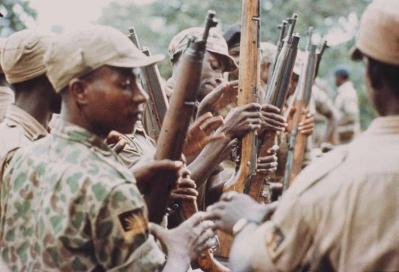 The 1960s brought about the liberation of Nigeria as a colonial entity which led to political dissent and subsequently the civil war. The Igbo ethnic group and neighbours fought as Biafra against Nigeria in hopes to succeed from the state. This saw many young Igbo men willingly enlist into the Biafran military.

As the prevailing event of the 60s, the look for this decade demonstrates typical military attire for the time period.

After independence western styles and western trends began to have an increased influence on fashion and beauty preferences amongst Nigerians. 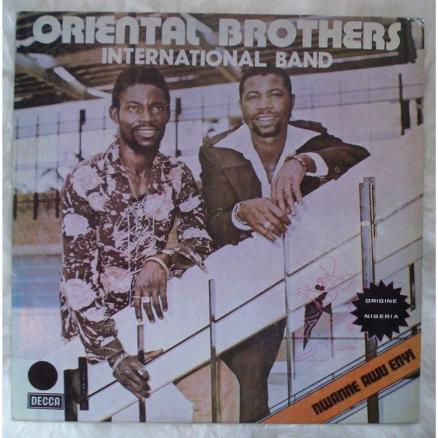 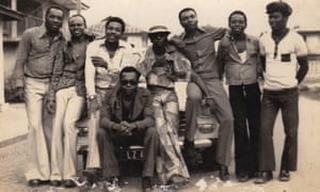 For the 70s we’ve selected a look that was inspired by Nigerian high life musicians who were heavily influenced by worldwide trends. This brought about the wearing of ‘bongo’ (flare) trousers, flamboyant open-chest shirts and a statement afro.

From our research, the 80s can be marked as a kind of renaissance in the wearing of African style clothing amongst men. This was often coupled with western items of clothing.

It should be noted that many Nigerian men of all ethnic groups would wear the ’Agbada’, nicknamed ‘1000, 500’ a traditional Yoruba men’s clothing item.

In our interpretation, the model is wearing a West African style top and necklace with western style trousers.

The look for the 1990s was inspired by multiple sources. The top left photo was taken in 1997at a party for Osabebe, the top right is a 90s cover of the Nollywood movie ‘Nneka’, and the lower left is a photo of the attendees at JJ Okocha’s 98 wedding.

Globally the 90s R’n’B music scene influenced much of the African diaspora with it’s suave and chic attire. The 90s success of the Nigerian football team, who often wore long unconventional hairstyles also influenced many.

For this look, the model is wearing sunglasses, a flat ‘Gatsby’ style cap, a black shirt, trousers and blazer.

The 2000s was heavily influenced by African American hip-hop attire. This was both emulated by Nigerian musicians and in shown in Nollywood films. The 2005 music video to ‘Temptation’ by P-Square Ft Alaye was the main inspiration behind this look.

Most notably, this decade saw the widespread wear of Isi-Agu amongst men of all ages, as shown in the image on the left.